That’s why Uncle Sam is the symbol of the USA

If USA can have a face, it will be the Uncle Sam, one. Infact uncle Sam is the official symbol of the United States since 1960 has been approved by the US Congress, but the origins of its history dating back to the previous century.
During the war against Britain in 1811, the meat supplier for the army was a New York Butcher, Samuel Wilson, this was sending the victuals in barrels with the initials ‘US’ (United States) interpreted incorrectly by the troops , who knew the name of the butcher with his nickname ‘Uncle Sam’, cheering precisely the arrival of barrels exclaiming, “is arrived the uncle Sam’s meat!”.
In the following years various caricatures have obscured the original somatic traits of character, which has become famous around the world, especially for the enlistment poster of 1917, however, the true face of Samuel is still recognizable on the statue dedicated to hthe Uncle Sam erected in Arlington, Massachusetts, the hometown of Wilson. 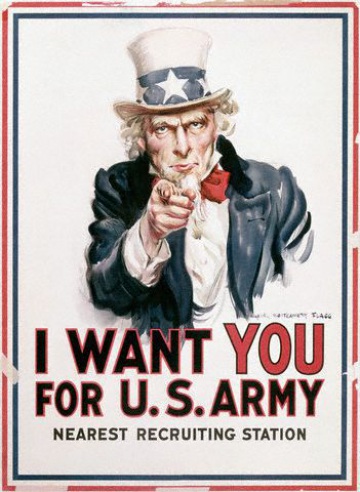